The Heart & Soul of Jefferson Transit

Those of us who call Jefferson County, Washington, home are truly blessed to be surrounded by such awe-inspiring beauty. But even more awesome are the giving, caring souls who share our little piece of paradise. One of the most caring and giving of these was Alice Loraine Lane.

Through rain, snow or sunshine, Alice drove her Jefferson Transit bus to and fro along local highways, safely delivering countless thousands to their many destinations. But Alice was not just a bus driver. Alice Lane was a friend, a counselor and a big sister whose love and compassion for all things living became legendary.

Alice began driving for Jefferson Transit on March 1, 1996, and throughout the next 21 years there were so many acts of genuine caring from this unique person that it would take a book to relate them all. I’ll recall just a few.

Several years ago two Tlingit natives, visiting from Alaska, missed the last Saturday bus to Poulsbo and were stranded in Port Townsend until Monday morning. At the end of her 12 hour shift, Alice came back in her own car and drove them to the Bainbridge ferry dock—some 2 ½ hours away. They offered her money; she settled for a native blessing. When a long-time bus rider died one cold night, homeless and alone in the weeds of Kah Tai Lagoon park, a grieving Alice Lane bought flowers and said a silent farewell as she placed them on the ground where he made his final bed. When no one claimed his body, Alice paid for the cremation. And then there was the elderly, feeble bus passenger who had outlived most of her family and friends. Often, Alice would go over on her day off to help out with laundry or just visit.

On August 16, 2017, gentle, caring Alice passed from this mortal life. Some tell me it was her time to leave. I don’t know. Perhaps the answer may be found in the words of poet/songwriter Don McLean, in his tribute to Vincent Van Gogh: “This world was never meant for one as beautiful as you.”

In January 2014 Alice Lane was interviewed for a history of Jefferson Transit. There are two stories from that interview that I would like to share:

Back in 1996 Alice was a volleyball enthusiast, and every Wednesday night would play at Blue Heron Middle School. Another Wednesday night regular was a man whom Alice knew as Jeff, and over time the two became friendly acquaintances. When Alice heard that Jefferson Transit was hiring a driver, she decided to apply for the position and began studying to prepare for the fateful day. When a nervous Alice Lane walked into the Transit interview room, there sat her volleyball friend, Jeff. Alice said “hello Jeff—so, you want to be a bus driver too?” He replied, “well, not exactly; I’m the general manager of Jefferson Transit.” Figuring that she had just blown the interview, Alice became relaxed and more or less breezed through the process. A few days later she was notified that she had been hired!

Around 3:15 p.m. on Saturday, April 22, 2000 during heavy rain, seventy-seven-year-old Dorothy Jones of Coupeville and her fifty-five-year-old daughter, Judith Lyon of Mukilteo, were traveling eastbound on SR20 one mile from the intersection with Highway 101 at Discovery Bay. Jones was driving a 1995 Honda four-door sedan up the hill toward Eaglemount to Discovery Bay when her car began “fishtailing out of control.” Coming downhill toward her was westbound Jefferson Transit #965 driven by Alice Lane. Jones’s car “crossed the center line once, returned to her lane of travel, hit the road shoulder or edge and then suddenly cut across the road at a 90-degree angle directly in front of the oncoming bus.” Alice saw the car careening towards her and tried to pull over, but in a split second the vehicle had slid sideways into the front of her bus. The two Whidby Island women were instantly killed on impact. “‘I couldn’t see that [the bus driver] did anything wrong,’ said Washington State Patrol (WSP) trooper Gabriel Fletcher, who assisted with the on-scene investigation. ‘It was the car driver who caused the accident.’” Jefferson Transit Interim General Manager Melanie Bozak reported: “Our driver was already braking as she came around the corner when she saw the fishtailing car, she had only one or one and a half seconds to respond. She tried to give the other driver as much road as she could to get control of the car. There was nothing else our driver could do to avoid collision.”

A reporter for the Port Townsend & Jefferson County Leader wrote: “After the collision, Lane ran to the car. Recognizing that its two occupants had been killed on impact, she covered them with her own sweater and coat. The two bus passengers, who had braced themselves before the crash and were uninjured, helped direct traffic at the accident scene.” During an interview for this history, Alice told me of that tragic day and recommended I include the story here because “it is part of Transit history.” She told me of her profound grief, even though the accident wasn’t her fault, and recounted how she had attended the victims’ funeral and met with their family members, who were all sympathetic to her suffering and treated her warmly. In fact, the Port Townsend & Jefferson County Leader reported that “A member of the victims’ family left a recorded message at the transit office, saying that the family knows how bad the driver was feeling. And they also knew she did everything she could have done to avoid the accident …”

The trauma Alice Lane experienced that day haunted her for many months, and she still praises Melanie Bozak for her understanding and patience during her recovery. Nevertheless, her healing was not quick. The first time Alice tried to return to work, she recalled that “I started my bus, then walked around the outside to check lights, tires and such. When I walked in front of the bus and stood there looking into its shining headlights, the whole thing came back and my knees got very weak. I knew I couldn’t do it; I wasn’t ready!”

In 2013-2014 I researched and wrote a 350-page history of public transportation in Jefferson County, Washington, which was sponsored by the Jefferson County Historical Society. One of those who helped with the project was Alice Lane, who, along with stories and memorabilia, supplied the original art work for the book’s cover. A limited number of books were printed in 2015, with copies going to the Jefferson County Historical Society, Jefferson Transit and JT’s first general manager, Peter Badame. Alice was one of the few who received a printed copy of the book, which I gratefully presented to her as a gift for her help, and because she was a dear friend. A week or so  later Alice sent the below card attached to a jar of her home-made organic loganberry preserves:

Wendy Jensen recalled something that occurred a few years ago while riding Alice’s route #2 Fort Worden bus: “I was having a hard time, and it was my birthday, and I told Alice it wasn’t a good day. My stop came, and she said, ‘I hope you have a good day.’” That evening, after Wendy returned home from work, she saw a Jefferson Transit bus stop across the street from where she lived, and watched as Alice Lane got out and ran across the street and knocked on her door. “I open the door, and there she is with a present—a box of truffles! It was one of those moments when you recognize humanity, and I recognized her light. It was powerful. If all of us in the world treated everybody the way Alice treated us, we’d have no problems in the world. She was the spirit of our town in a way. I can’t believe she’s gone.”

I’d like to share two songs that remind me of Alice. They were written and are performed by poet/songwriter Kate Wolf, who, like Alice, left this life way too soon! These Times We’re Living In / Unfinished Life

Remembering Alice Lane on the first anniversary of her passing: 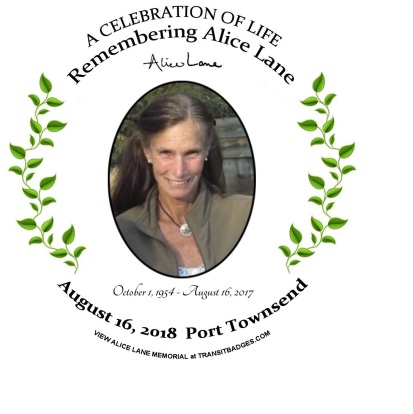 Remembering Alice Lane on the second anniversary of her passing:

PORT TOWNSEND W.B. FESTIVAL SHUTTLE BUS COMPANY In 2012 the Jefferson Transit Authority Board, which oversees public transportation in Jefferson County, Washington, voted to cancel Jefferson Transit‘s Sunday bus service. Over the next three years the Board refused repeated requests by public transit advocate Darrell Conder to run one shuttle bus on Sunday during the annual Wooden Boat Festival, which is the most profitable tourist draw in Port Townsend/Jefferson County. Consequently, in 2015 Lloyd Eisenman, Burt Langsea, Alice Lane and Darrell Conder formed the non-profit Port Townsend Wooden Boat Festival Shuttle Bus Company, which operated between the Haines Place Park & Ride to downtown Port Townsend/Point Hudson on Sunday, September 13, 2015. The drivers were Jefferson Transit operators Alice Lane and Lloyd Eisenman, and retired Seattle Metro / Jefferson Transit operator Burt Langsea. The one-bus operation was a success with some 350 passengers being served. There is one known badge for this company: it is made of nickle-plated brass, measures approx. 2″ x 1¾”, has a single threaded post and a pin post. It is marked “Alice Lane” and dated on the reverse “Sept. 13, 2015”. 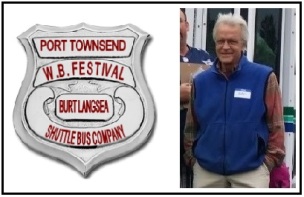 (The above artwork is a pen & ink drawing created by the late Alice Lane. It depicts the Jefferson Transit (Port Townsend, Washington) Haines Place Park & Ride and was used as artwork on the cover of a 2010 Jefferson Transit schedule. It is used here by permission.)

Return to the Top of the Page